By a vote of 3 -2 the BRA voted Thursday night to approve the Article 80 review application to build 3200 Washington Street.

The hearing was not open to public testimony.

Michael Kane, director of Mass Alliance of HUD Tenants (MAHT) stood up to protest that there had been no public comment; he was overuled; ” a motion is in order.” said Burke.

That didn’t silence Affordable Housing Egleston, Beantown Society. Bikes Not Bombs,City Life and Mass Alliance of HUD Tenants from chanting and stomping THEIR public comments in the hallway outside the closed door of the BRA board room.

” What do we want? Affordable housing! When do we want it? NOW!!”

They brought the testimony through the walls.

BRA Assistant Project Manager Edward McGuire, who had shepherded the Article 80 process all year, had to acknowledge this in his opening statement.

“There are a lot of different sentiments from the group outside. ” he said.” Dedicated to 100% affordability for those earning $26,000 a year. We cant reach everybody’s expectations.” The height has been reduced, he said, and there have been changes in parking.

McGuire introduced project attorney Joseph Hanley. The three members of 3200 Washington St LLC Justin and Paul Iantosca and Dan Mangiacotti remained seated in the audience. They did not speak. When Hanley introduced them only Justin Iantosca stood up halfway and raised his hand.

(In contrast the project that preceded 3200 Washington St, a proposal for a 229 unit 100% affordable workforce housing building near North Station, was presented by the developer himself).

Hanley said, “this site is unique. There is no displacement here. We’re proud of that. ” He said the development would greatly improve on an underutilized site. He added that ” it is a big challenge for the development team. There is a severe grade change and a big presence of bedrock.”

Hanley said, almost in response to the demonstrators, ” we would love to have unanimous support. There IS a lot of support. We have 170 letters of support.”

He said the team had met with ” ESNA, Egleston Square Main Streets, Chilcott Place neighbors. The Neighborhood Council zoning committee. We walked around the neighborhood.”

At this point he projected on the wall an aerial map of Egleston Square sprinkled with green cluster dots showing the outreach areas that had been covered.

( In later message to the Jamaica Plain News , 3200 Washington St LLC community organizer Rosy Gonzalez said ” I knocked on every door on Iffley Rd., Montebello Rd. , Chilcott Place and Grenada Park. .. I focused my outreach around when meetings were taking place.” If no one was at home , “I left flyers.”

Architect Kevin Deabler made a presentation on the design and elevations. ( It was not easy to follow. The acoustics were poor and the power point was projected on a side wall of the board room out of the view for half the audience including this writer).

He said” a lot of people here talk about affordability. So we are very proud of it. [that the number of affordable units is higher than required.]”

” OUR streets !! OUR homes !! We want affordable housing NOW !!” chanted and pounded the demonstration outside.

Deabler could barely be heard over the protest voices. ” This section of Egleston Square is pulsing with activity. It is very diverse in its abutting neighborhoods.”

Deabler said” It is difficult to build on. [ The development] cannot be compared with other flat projects.” He added that the mezzanine level had been dropped to 6 stories.

Hanley mentioned that 52 Montebello Road is part of the development which is currently ” an eyesore in the community.”

The demonstrators kept chanting and pounding the floor outside the board room door. 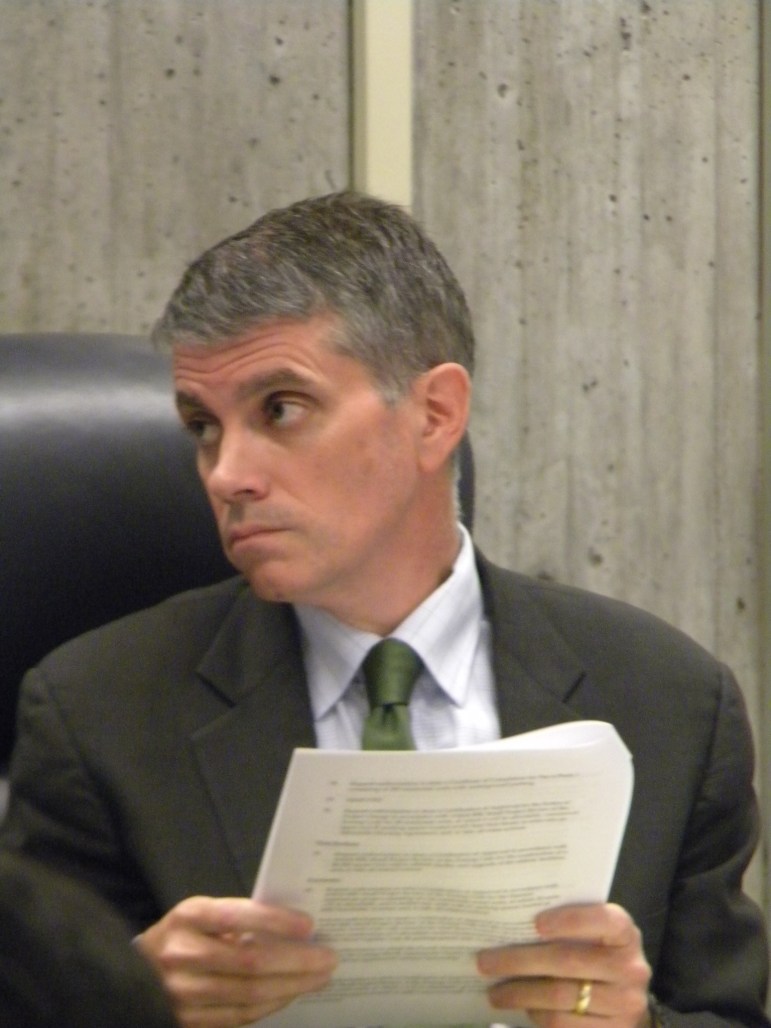 BRA Director Brian Golden hears the demonstrators’ chants outside the board room. No attempt was made to move or silence the protesters. who numbered about 25. 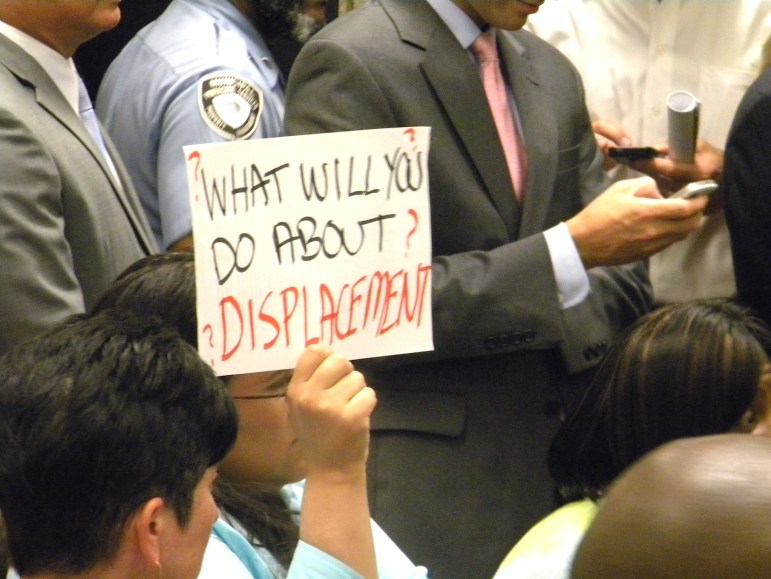 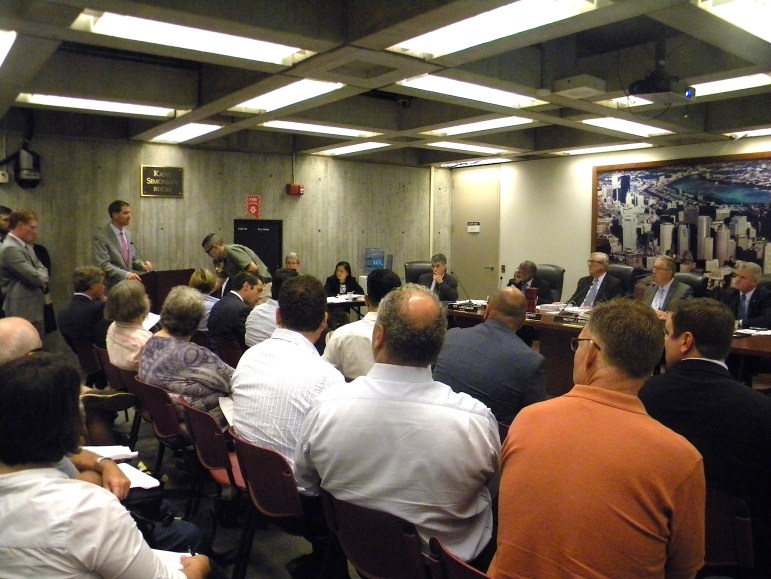 R – L Back towards the camera. Dan Mangiacotti. Paul Iantosca and Justin Iantosca 3200 LLC partners sat in the audience and listened to their attorney speak about their project. 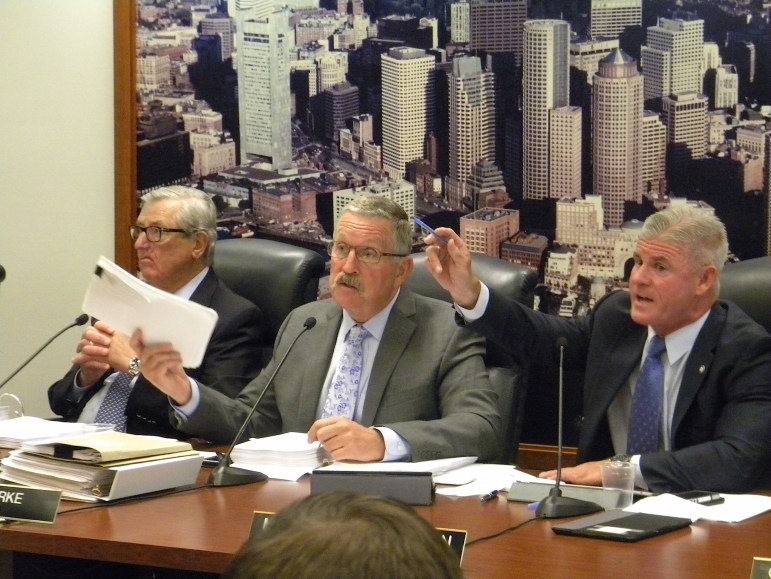 BRA Board Chair Burke – holding support letters- quiets an audience outburst – while Board member Monahan said people should be clapping in favor of the project. Outgoing BRA board member Paul Foster at left. 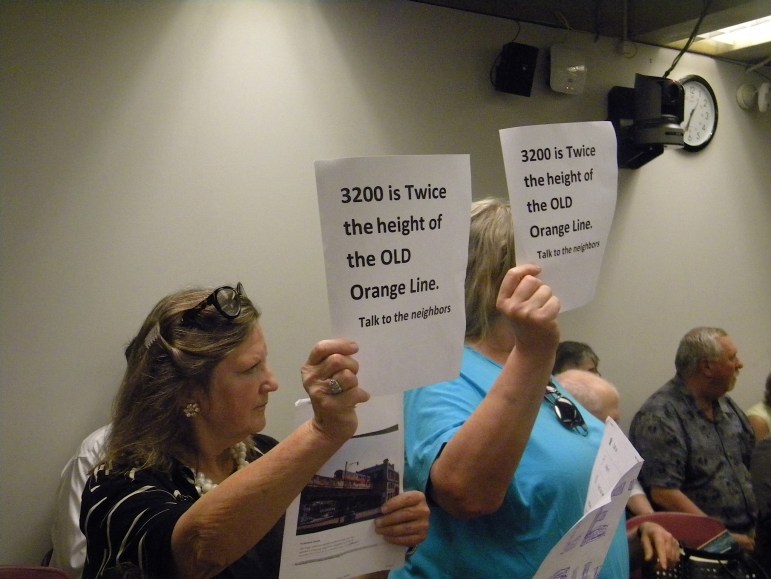 Marie Turley and a neighbor were allowed in late to the hearing. Most were kept outside. Their message had double meaning. 3200 Washington St will be the biggest project since the Boston Elevated Company built the Orange Line through Egleston Square in 1908-1909 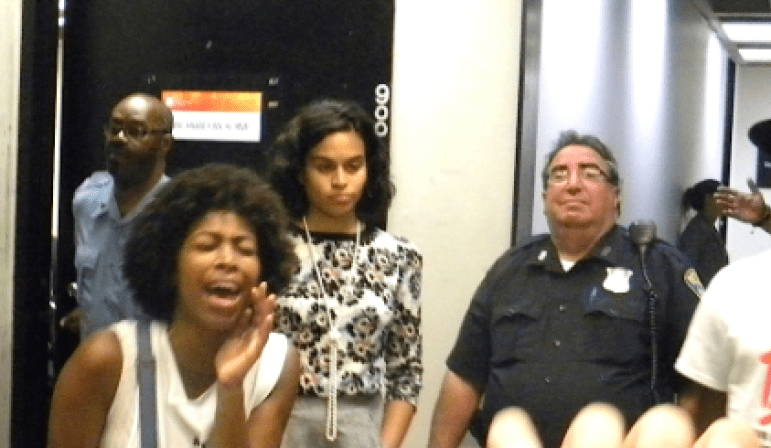 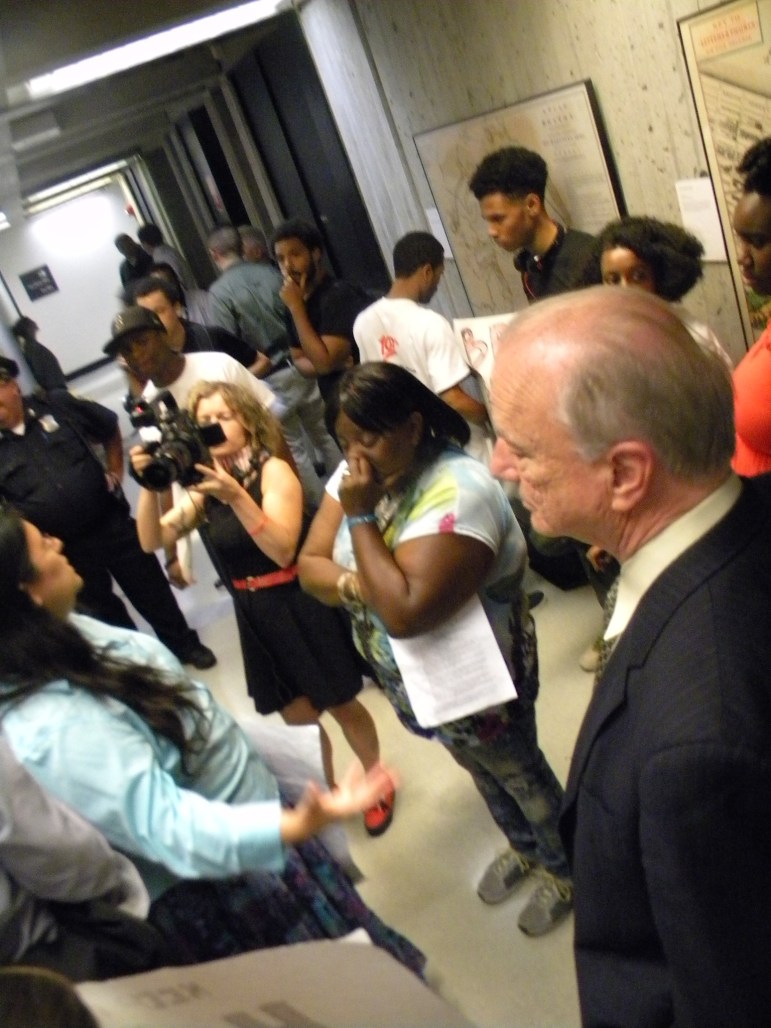 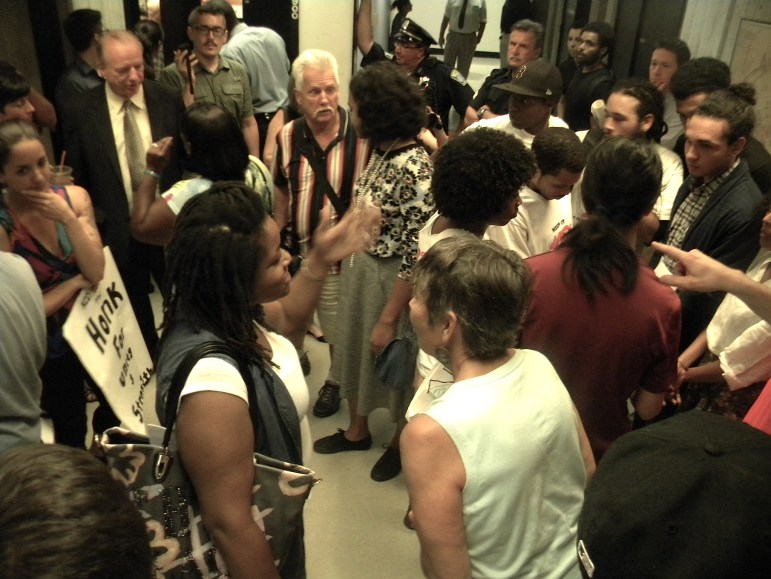 Protesters outside the BRA board room. Mukaji (front L) spoke out after the decision t approve.” You just voted without public comment.!” 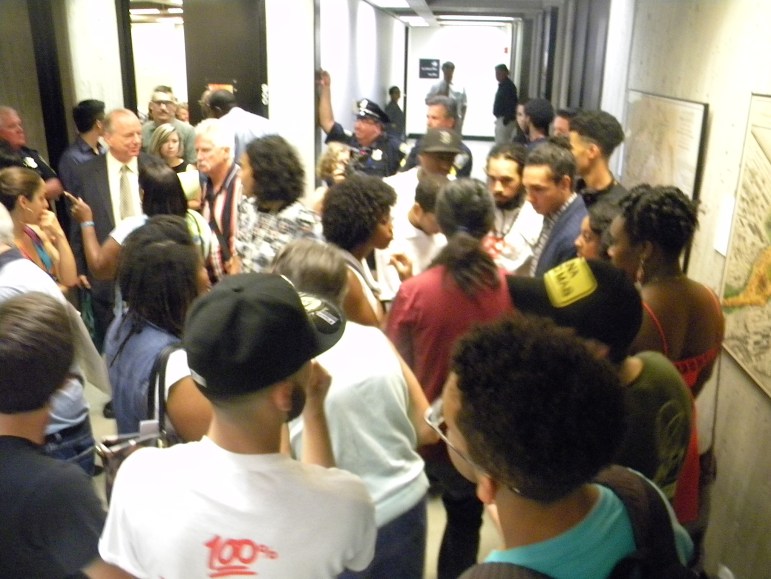 Movement leaders and members talk over the BRA vote in the hallway outside the board room.

One Boston Police officer and one Municipal Police officer inside the board room allowed some latecomers to enter. Outside the Municipal and Boston police kept a respectful distance and made no attempt to stop the chanting and pounding of the more than 25 mostly youth demonstrators. There seemed to be an unspoken agreement that the demonstrators would occupy their space and the police would occupy their space.

According to one movement leader, however, police prevented one demonstrator .Alex Ponte Capellan. from delivering petitions to the BRA board during the hearing.

Hanley completed his statement by emphasizing affordability. “We are providing more than is required on the site. We are far in excess of any privately funded project that I know of. We are pleased that we could do our part” for the community, he concluded.

” The community is out there, actually, ” said Beatriz Acevedo sot voce. She lives on Washington Street in Jamaica Plain.

BRA board member and Jamaica Plain resident Theodore Landsmark asked assistant project manager McGuire about the additional community meetings after the BRA first got notification in Dec 2014. ” There has been a fair amount of staff help through this process.”

” It makes me wonder about the great differences of opinion. How many meetings did you have?”

McGuire replied ” there have been 21 meetings.”

Board member Michael Monahan remarked that this is a “100% privately funded development” that exceeds the number of affordable units on site. Plus, he added the team is removing a “problem property”.

Gesturing to the blue door Monahan said ” I dont know why people aren’t clapping ” in favor of this development.

“Its because they cant afford [to live there].” said one member of the audience.

At this point Chairman Burke called a vote.

“But you didnt have public comment.” said Michael Kane of MAHT.

There was a pause

The gavel went down.

Docket #9 for the construction of 76 residential units located at 3200 Washington St was approved.

Mujaji A of Dorchester stood up.

In the hallway the protests continued and people tried to understand the decision.

One audience member told the News, ” Two members who voted, Consuelo Thornell and Paul Foster, it was the last meeting.” ( Thornell and Foster were replaced by Mayor Marty Walsh on July 20 with Carol Downs, who owns Milky Way and Bela Luna, and Priscilla Rojas.)

Many were confused and angry that no public comment was permitted.

In a message later that evening to the News BRA Director of Communications Nick Martin explained,

“A project like 3200 Washington St does not necessitate a public hearing. Only PDA’s” [ Planned Development Areas], 121A applications [regarding tax abatements] institutional master plans and Development Impact Projects have a public hearing. 3200 Washington St went through an extensive community process and had a comment period double the length of a typical project.”

In the hallway outside the board room movement members Alex Ponte Capellian and Yohan Beyene read a statement.

” The BRA staff and the developers have disrespected the community. [ BRA Director] Brian Golden promised to meet and didnt. What the developers and the BRA are calling affordable is not affordable to Egleston[ Square]. The median income for renting households is $37,000. People are already being displaced in Egleston [ Square]. There are a lot of ways the developers could do better. Apply for subsidies. 4% tax credits. Accept section 8 vouchers. Make less profit.”

On Friday 3200 Washington LLC members Justin and Paul Iantosca and Dan Mangiacotti made this statement to the News.

” As longtime residents and employers in Jamaica Plain we have a personal connection to the neighborhood. Through an extensive community outreach process which began over a year ago we sat in living rooms and spoke with abutters, neighbors and business owners about 3200 Washington Street and are proud of the project that resulted. We have made a number of changes .. based on the comments we have received, including the renovation of six currently abandoned units for use as affordable rentals and relating the only existing business on the site to a new location. As private developers we are bringing 18 units of affordable housing, 23.6 % of the project, to a location in the neighborhood where no housing exists today. We appreciate the active participation of everyone in the neighborhood….”

3200 Washington LLC goes before the Zoning Board of Appeals for the required variances in Sept 15.